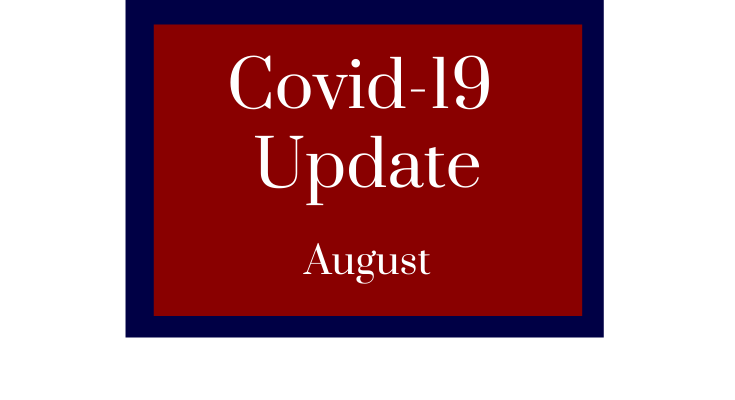 As we in New Jersey near 6 months since the first declaration of Public Health Emergency by Governor Murphy (Executive Order (E.O.) 103 on March 9, 2020), the firm continues open for business and ready, willing and able to accommodate your needs by meeting in person, outdoors at our location or yours, indoors with masks if all parties are comfortable, or by Zoom, through which we also have attended hearings, and witnessed will and document signings.

On August 3, 2020, the Governor issued three Executive Orders, 172, allowing public employees to immediately enroll in the State Health Benefits Program (“SHBP”), 173, decreasing the indoor gathering capacity limit and 174, declaring a state of emergency due to Hurricane Isaias, which was lifted on August 13 by E.O. 176.

E.O. 173 noted that capacity limits were initially expanded due to a decrease in reported new COVID-19 cases, but even in the second phase of the NJ Road Back program, protective measures as advised by the Department of Health (“DOH”) must remain in place. The E.O. contrasted indoor “gatherings” with the patronage of indoor retail establishments, identifying practices such as congregating in large groups and remaining in close proximity for extended periods as “factors that have been linked to the increased risk of COVID-19 transmission”; it pointed out that the rate of transmission and the number of cases both had increased over the two weeks immediately preceding. The E.O. also distinguished the ability to conduct contact tracing on more casual events from those which customarily would be more defined, superseded Paragraph 1(a) of E.O. 152, and limited indoor gatherings to between 10 and 25 persons, except religious services or celebrations, political activities, wedding ceremonies, funerals, or memorial services, whose upward limit remained at 100 persons.

On August 13, the Governor also issued E.O. 175, opening New Jersey’s schools for in-person instruction subject to critical health and safety protocols, listed in Paragraph 2 of the Order.   E.O.’s 104 and 107 were superseded to the extent that they required schools to remain closed, and the school districts were required to submit reopening plans. All schools which participate in national school lunch and breakfast programs must offer the required meals to all children when the school day involves at least four hours of in-person or remote instruction.

Executive Order 177, also issued on August 14, aims “to protect public health by mailing every active registered voter a VBM Ballot ahead of the general election.”  It noted previous Executive Orders’ attempts to protect the public and that states generally have the discretion to dictate the time, manner, and place of elections, and that polling places are having difficulty retaining workers due to the pandemic. The November General Election shall be conducted primarily via vote-by-mail ballots, but each county must open a minimum of at least one (1) polling place in each municipality, subject to occupancy and safety restrictions. This was modified by Executive Order 179, which noted that the United States Post Office has advised that voters must use First-Class postage to return their ballots to the County Boards of Elections so that it will be delivered 2-5 days after it is received by the Postal service, and mails are taking longer for delivery than typical, and therefore allowed counting of ballots after November 3 until completed.

In a long-awaited move by many, on August 27, Governor Murphy also issued E.O. 181, allowing gyms and indoor amusement and water parks to reopen effective Tuesday, September 1. Consistent with E.O. 173, the capacity limits are 25%, and several other safety precautions apply.